Gérard Pautonnier's new comedy 'Grand Froid' came out to the cinema in June 2017. Before working for the cinematographic industry this director used to work for advertising and television. Patrick Puzenat collaborated with him as executive producer. 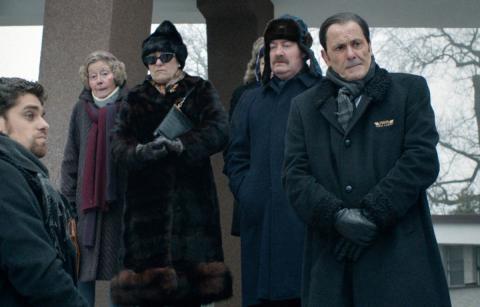 'Grand Froid' tells the initiatory adventures of the two last employees working for the company Ganglion & Fils - specialized in the organisation of funerals. Georges (Jean-Pierre Bacri) is an old gravedigger who will retire soon. He works with Eddy, a beginner in the profession. The story starts when they get lost with the hearse they drive and lose the procession they should have followed to the graveyard.

This movie has been nominated to the Aubagne Film Festival (2017)

'Grand Froid' is the first feature film of this director.
It has been adapted from Joël Egloff's novel 'Edmond Ganglion & fils' published in 1999.
In 2015 Gérard Pautionnier had already directed a movie inspired of an other of his novels: 'l'Etourdissement'.

Gérard Pautonnier has directed various short ads and TV series. He started his career conceiving ads for companies like Icade, la Française des Jeux or Caprice des Dieux. Then he was in charge of project management for two series 'Leonardo' and 'Simples Mortels'. Between 2006 and 2007 he developed and directed 'Samantha' for the TV channel France 2. In 2012-2013 he directed the two first seasons of 'Nos chers voisins' for TF1. 'Grand Froid' is his first cinematographic feature film.

Before watching this feature film, let's discover two other creations of this director:  Le Cerf and Pique-Nique - two short movies directed by Gérard Pautonnier in 2004 and produced by PuzzleFilms and Patrick Puzenat. These videos have been made for the AFPAS - association for protection of wild animals.

To conclude, let's discover the teaser of 'Le Grand Froid' !