This month of March is full of activity for Cinq2trois.

Preparing a documentary about Manu Dibango, our team has followed him on a trip to Rio de Janeiro. This experience made us discover the whole city and its vivid atmosphere (in the perspective of the Olympic Games). Manu Dibango went there from 13th to 19th of March as Ambassador for the international week of Francophonie. This trip results from a partnership convention between the international organisation for Francophonie (OIF) and the Olympic Games organisation committee, signed in November 2015.

The goal of this trip is to promote the French language - that is one of the two official languages of the modern Olympic Games (with the English language). 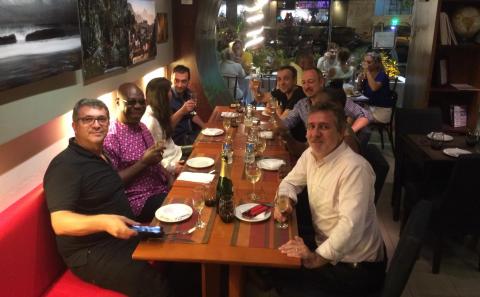 We shared a dinner with all the protagonists. This was the occasion to talk about the program, the activities and services to offer to the athlètes.

During this week, Manu took part to various events as a concert at the 'Maison de France' on March 17th and the plantation of a mango tree at Rio's botanical garden with Carlos Nuzman.